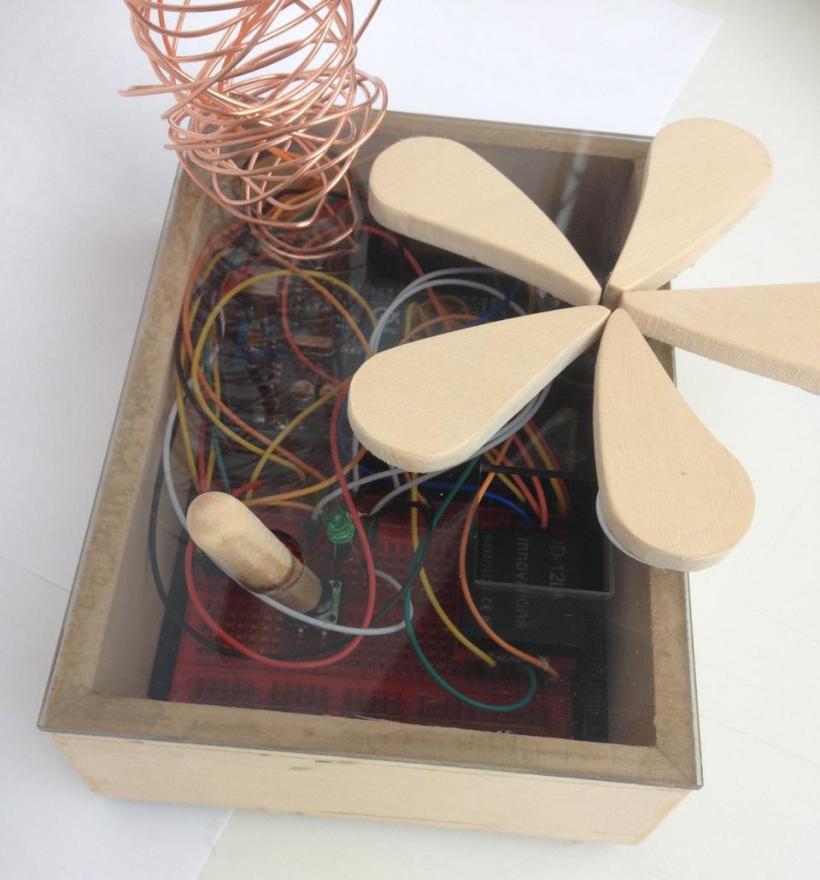 The other week, I said some mean things to Arduino. Now, please know that this wasn’t out of my dislike for you, or even my dis-love. It wasn’t you. It was me. So, with this blog post, I will try to make right the things I made wrong, and formally apologize for lashing out at you. After all, you are an inanimate object. I mean, it really wasn’t your fault.

For those who need a recap, my last blog post was ended with an emotionally distraught grad student (me) and an Arduino board content in its ivory tower and with a complete disregard for us mere mortals. The next day, I met my lab partner to go over our project only to find that she also had the newest Apple OS and was unable to run processing as well. BUT, she also had the ability to run Windows on her system. All was right in the world…at least for the time being.

But with two days left until our quiz, and 4 days left until the functional prototype, moral was still low. On Monday night, I sat with my coffee, bread board and wires trying code after code. I was reading Arduino forums, and had even started my own forum thread.

Suddenly, things started to change. I checked my email to find my previous blog post had solicited emails from several SparkFun associates. And after only mere hours of starting my thread, I had people responding. Complete strangers were taking their time to help ME with MY project! WOAH!

I had hope. So, I kept tinkering and downloading, and then it happened. I pressed a button, and my servo motor turned. I pressed it again, and it turned another time, and another time, and another. AND, when I pressed a different button, a light went off!! There was still a long way to go, and I honestly had no idea if any of the code was correct or just functioning because of dumb luck, but it was something.

How I Acted on the Outside

How I Felt on the Inside

After a brief nap, I went to class and handed off my project to my partner. Related side note, I had received a ticket to see President Obama speak, and wasn’t going to let a quiz get in the way. Luckily, the professor was excusing any student seeing the president speak and told us to return to class as soon as it was finished.

After a rousing debate on education policy (lean about the Student Aid Bill of Rights here), I skipped back to class only to find that the quiz had been canceled! It turns out I was not the only student who saw the president and, because of this, the professor couldn’t make the quota for the quiz. To make things better, my partner had been one of the only people in class which meant her and the professor spent almost the whole time fixing all of our issue! PRAISE JESUS AND OBAMA, HALLELUJAH!

To wrap things up, this gave us the next 2 days to really hone in our design and fix any last minute coding issues. When Thursday finally arrived, we had a great functioning prototype and were pretty darn proud of it. The function was quite simple. Pressing a button turned a servo motor into 1 of 5 positions. As it turned, 1 of 5 RFID tags were read by a reader. When the reader read the tag, and image an song played on a screen. In addition, pressing a button also activated a light that went off when the button was done being pressed.

…ok, maybe that’s not simple. Frankly, I don’t know. But regardless, we were happy. We called it The Lilly Box, and let the wires and components of the circuitry act as a feature.

With that, thank you, maker community. You are all awesome. Now all I have to do is get through our final project on wearable, and maybe I can pass as moderately competent in Arduino. 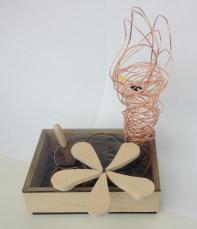 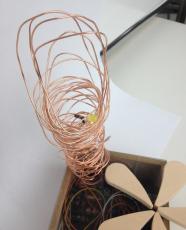 …I wish I could flush you down the sink.

I’m going to be honest. Technology scares me. The thought of having to do anything remotely high tech paralyzes me. Even using the laser cutter to cut cardboard took encouragement from my peers. But it’s an inevitable truth of my new profession that I will one day need to admit defeat and learn how to CAD, program and wire.

In an attempts to mitigate this fear, I signed up for a course entitled “Interactive Products.” In this course we would learn about integrating technology, inputs and outputs into designs. The first part of the semester was doable, filled with Little Bits and Lego Mindstorms. I was on a high. I can do this! 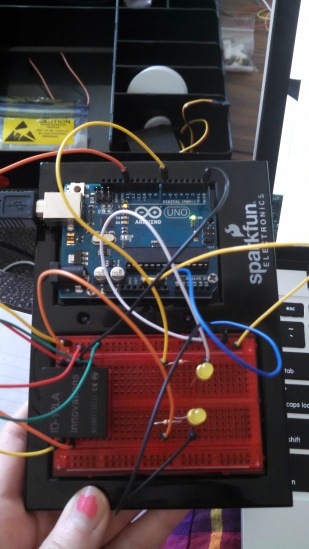 But then the day came. This week, we began the Arduino project. Suddenly I was confronted with wires, and sensors, and coding, and programming, and inputs, and outputs, and lions, and tigers, and bears…oh my! In less that a week, I was supposed to design a toy or game that had two inputs (including and RFID) as well as 2 outputs that included an audio/visual output.

I sat in class staring at the bread board for over an hour, my professor and TA preoccupied with other students. It seemed like everyone around me knew exactly what they were doing and that I was being left in the dust. But I remained strong!

On Saturday, I enlisted my roommate who is getting her masters in electrical engineering. There were hickups, and mishaps, buy things were chugging along. We had this in the bag! No sweat! That is…until we got the evil Java error message. Well, over the next 3.5 hours I consulted my roommate, my classmate who is an Arduino god, my TA, and just about every other person I knew who had any knowledge of Arduino. Nothing. I took a break for a few hours, and revisited it later in the evening. Nothing. I even consulted my roommate getting her masters in Aerospace Engineering, as had the Arduino God take control of my computer remotely to figure it out. 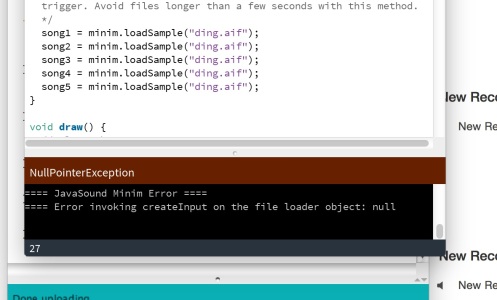 By this point, I was a ball of mush. I was at my wits end. Finally, we figured it out. The problem? Well, it turns out that my brand new fancy pants computer is SO new, th

at it was not compatible with the processing software used with Arduino. So much for a new computer! But, it was OK. I still had my old Mac. I could just download it there.

Turns out my old mac is too old. It was a case of Goldilocks and the 2 Macs. I then proceeded to try and download Windows onto my Mac only to find that I didn’t have a properly sized USB, and that I would need to…oh yeah…buy Windows. So, I guess that’s not an option.

And this brings me to today. With the assignment due Tuesday, and no progress made, I ask you to excuse me while I go turn into a ball of mush in the corner of my apartment while eating a pint of Ben and Jerry’s and watching Notting Hill. Say a prayer for me, good friends, and send me any good Karma you can spare.

This week has been a flurry of design activity…most of which had nothing to do with my design work. And, honestly, I think it was exactly what I needed.

Two big things have been happening this week. The first, was a major bucket list item for me. On Friday, I had a blog post published with National Geographic’s Great Nature Project Education Blog for my work with The Biomimicry Institute. I’ve loved Nat Geo ever since I was a little kid, and to in some tiny way be affiliated with their work is just beyond exciting for me. Please take a look at the post here and let me know what you think!

My other big thing has been my participation in the Global Service Jam. From Friday evening to Sunday morning 20 or so designers, consultants, chefs, improv specialists, marketing professionals, and even a toddler were put in a room and asked to create a service. Our prompt was a picture showing how to make an origami fortune teller. That was it. The results, however, were amazing. There was a communication device for families of the armed forces, a travel app, a global cooking service and ours, which was an events franchise in line with a Tough Mudder or Color Run called Laughter on the Front Lines. You can see all of the projects here.

So, I am exhausted, and almost nothing on my to-do list has been accomplished. That being said, I am going to make this short and bid you all farewell for now. Wish me luck!

Living on the Straight Edge is the tale of one bull headed and semi-tech-literate woman's journey to becoming an industrial designer. She is overwhelmed, ill prepared and under caffeinated. Straight edge in one hand and felt tip pen in the other, she's ready to take on the design world.